Inspired by his newly acquired talent, the Valiant Little Tailor sets out into the world to seek his fortune and brag about his power, “cause it’s not easy to kill seven flies with one blow”. And since heroic acts were indeed tailored to his personality (which he found out while trying to defeat the two giants: Baby Giant and Enormous Giant) in the end he realizes that his true power lies within the sharpness of his mind and his wit. The two giants would have crushed him, if our little hero hadn’t figured out some clever and brave strategies to get himself out of trouble.

So on his way back home, overjoyed about his second victory, he cheerfully says to everyone he meets: “in life wit is more important than height!”. 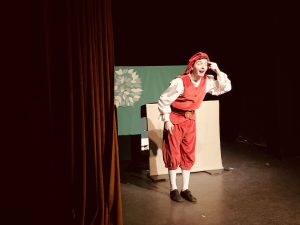