“Pockets full of bread is an absurd, tragicomic play about conscience, humanity, and death. At the same time, the show is a criticism towards the moral qualities in which the modern human dwells.

The contemporary human being, obsessed with their self-made complex moral value system, doesn’t abandon the problems and the conflicts but doesn’t solve them either. They sit and debate. Filling their pockets with breadcrumbs, they throw them feverishly into the pit, instead of lifting up the helpless dog. They delay acting efficiently. They look for scapegoats, for possible solutions, make plans or delegate rescue plans. All their actions are taken from a comfort place, their chair, sheltered by their own theories, fervently shouting speeches about noble causes. Therefore, life passes around them, with its real dramas, without acquitting them from a guilty conscience. A betrayed humanity takes its revenge; the space feeds itself upon uncertainty and the smell of death.”

This play is a case of an everyday matter that has shifted into a metaphor. An example of the powerful force of a trivial event, which filtered through a reflection, gains metaphysical potential. It has happened to me, since then, to write starting from a mundane fact, but I never had such a compelling revelation, embedded with a dramatic situation brought up by such an impressive real context.

It is an important play for me, that brings me back to Romania, to the period in which I was a teacher and also a young writer, playwright and a poet and I thought that literature had both critical and denunciation roles. I am very pleased with the fact that this play survived, got beyond time boundaries, generational borders and passed beyond linguistic frontiers. When a play crosses three decades, maybe it grasped something about the human nature.

Matei Vișniec, in an interview written by Ada Maria Ichim. 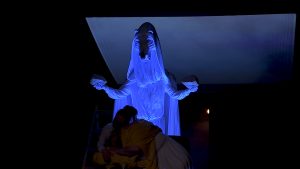 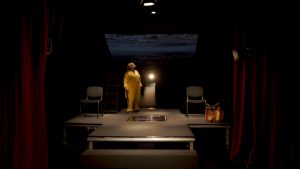