Meet Palkó, the cheerful little boy, who has an endless fantasy. He usually plays in the garden, having trees and flowers as his closest friends. One day, while having fun in his own fantasy world, he meets Panna, the little scilla who has all kinds of magic powers, like riding a cloud. The two children become friends immediately and start their adventures from fairy tale to fairy tale.

What is going on? What is going on with me? Am I a child? Am I a grown-up? Or maybe stuck in between, halfway there? Is this normal? Am I normal? Is it okay to think about this? I’m definitely thinking about this. You too? Me too.
The performance operates with all the important elements of puberty to show all of you: everything that you are experiencing happens to others too. You share the same worries and troubles; you are not alone.
It reveals a montage of the three main parts of every teenager’s life: school, family, and love. Everything changes fast in a short period of time like this and keeping the rhythm is hard. But during the show, everybody gets a chance to take a deep breath and take another look at their concerns because, in the end, they may seem less frightening.

“Let me tell you, dear Apolodor, why you are like no other.  You are both a penguin and a human being, because you can talk, sing, cry like a human, but also  have white and black feathers, a beak and wings, you are small and tall, you are for children and everybody else, you are a picaro and a Wilhelm Meister (it doesn’t matter if you don’t know what that means), you are a hero and you live inside a parody, more than that inside a fan-o-parodies, but you are quite unique, so no one can imitate you. You wear a tuxedo for every occasion. You also bear, without grandeour, the name of a well-known architect from Damasc. You are charming, you are a tenor, a traveler, a dreamer and a seducer. A monkey fell in love with you, and also, plenty of readers. In your world, you have astonishing friends; you have Suzi the camel, who is like a mother to you, while together with Ilie the kangaroo  and Amedeu the lion you make an unforgetable clover.” 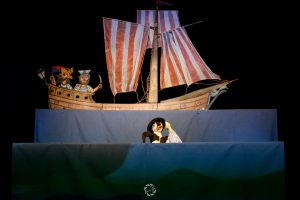 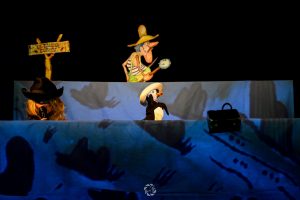 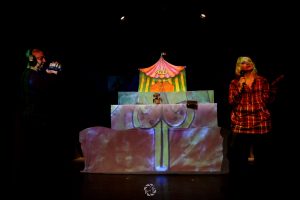 If an angel descends from heaven, would we let it into our hearts? In a world full of Christmas gifts and materialism, do we have any place left for the divine miracle?
„The Nativity plays have a great history, began from the times where Christianism was also originated. Christmas – as one of our most important holidays – starts the season of winter celebrations. This time was a great chance to revive and relive- and also share with others – the wisdom of the Christmas miracle.
The preparations for the Nativity play started at the end of the cultivation season, when the evenings began to be longer and the weather cooler. On these occasions, not only the children but mature men also took part in the play. Religious songs and joyous games – that’s how I remember my childhood.” -The director
Our wise men listen to the call and leave to follow the star to Bethlehem. During the way they fight, they get together, solve tasks and they lead us to Herod’s palace, then to the most divine place, to Bethlehem.
We get to know how does it feel not to find shelter for the night. Meanwhile, the devil is also awake, he tries to steal the newborn Jesus. Of course, he can’t succeed, because he is stopped by the Angel, the little Lamb, and the children.
This is a half traditional, half modern Nativity play, with a wooden spoon, straw bale and many more. The actors are Erdei Emese, Bodnár Tibor, Mostis Balázs, using the puppets that Gál Orsolya created. The text of the performance was produced by Demeter Ferencz, based on József Attila’s Három Királyok (Three Wise Men) poem and many folkloric elements.

The play shows the journey of self-discovery and the return to the inner child through light, movement, and music. Based on Antoine de Saint-Exupéry’s The Little Prince, the main character is a symbol of purity, innocence and joie de vivre. The adult is portrayed as being controlled by social conventions and prejudices, but he eventually does find a way to face the challenges of his transformation. He returns to the sincerity and innocence of childhood. As viewers, we may wonder: can we sometimes do this, too?

The performance is a contemporary adaptation of the Grimm brother’s classic tale. The story follows the original narratives, but in this adaptation, the idyllic tale has a twist: becomes more sinister. In this concept, the evil stepmother’s character gets into the middle of the events. In the beginning, she is not even a malefic figure, she becomes one during the story.

The scenery and costumes reflect on the modern world’s experiences, and in the performance are shown some contemporary situations as well. Although, the most essential thing for our audience is the fact, that in this modern tale there is a place for a happy ending and the good is winning at the end.

„There was a king, who gave stupid orders and there was a shepherd who didn’t care about those words. In a situation like this, we need to face the issues. But which face, and also what kind of eyes does it have? We need to look into the enticing eyes without being charmed. And who can look into those starry-eyes and put them into the shade? Not the stupidity, nor the fear, or the bear, or huge hedgehogs, or sharp scythe, only the…well, yes, the princess can look into those eyes, besides, make them shine even more. The world is in order as long, as there exist these kinds of sights.” Szabó Attila

The performance is an adaptation of the well-known Hungarian folk-tale, with the identical title. The starry-eyes are the metaphor of a wise and innocent attitude. We can learn toughness from the shepherd who is refusing the nonsense orders of the king because it is not easy to fight against vanity, but the protagonist is capable of winning, due to his gifts: wiseness and humbleness.

This play, based on Kipling’s tale, guides us into the world of deep forest, and the world of the animals living there.

The peace in the wood can’t be disturbed, except maybe by one of the animals: the curious little elephant who has a lot of questions to ask all the time. The animals got tired of the constant bother; therefore, they send him away. During his long way, he faces many dangerous adventures, until one of them causes a twist in the story: the little elephant becomes an honored member of the wood’s community.

„The adventures of Paprikajancsi are ageless because they tell stories about human stupidity and also about goodness in the world. The first one – as we know – is limitless, while the second one is slowly fading. According to the hundred years old experience, every trouble can be handled with a little smartness. The story shows these things, using historical methods of puppetry and having self-deprecating humor. We need to laugh and smile at our mistakes to evolve.” – Vadas László, the director.

The courage, wiseness, and vigilancy of Paprikajancsi helps him to win through the devil, in a story full of twists and adventures. The actors are playing more than ten roles, using hand puppets. 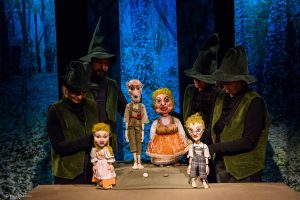 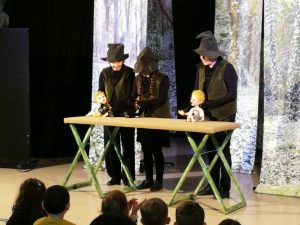 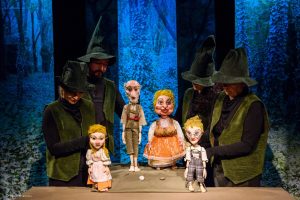 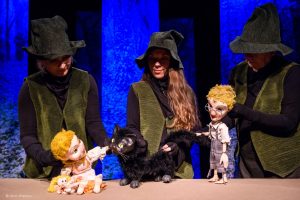